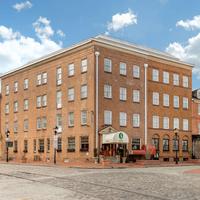 Excellent
based on 194 reviews
Compare vs. KAYAK |

Focus on the destination at the Admiral Fell Inn, Ascend Hotel Collection, in Baltimore, MD. Our location offers easy access to the Baltimore-Washington International Airport as well as many important business and government headquarters. You can depend on this smoke-free boutique hotel to deliver full-service amenities like free WiFi, free weekday newspaper, a business center with copy and fax services and much more. All of our guestrooms feature flat-screen TVs, hair dryers, coffee makers, desks, irons and ironing boards. Also, earn rewards including free nights and gift cards with our Choice Privileges Rewards program.

How far is Admiral Fell Inn Ascend Hotel Collection from the airport?

Does Admiral Fell Inn Ascend Hotel Collection have a pool?

No, Admiral Fell Inn Ascend Hotel Collection does not have a pool onsite.

“Location”
“Location”
“The location and room were amazing!”
“Best hotel experience ever! The ghost tour was 5star! From check in to check out the staff was amazing and helpful. If you stay here be ready for unique for certain.”