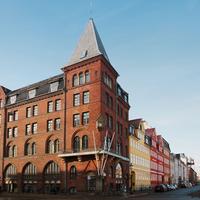 Excellent
based on 1,231 reviews
Compare vs. KAYAK |

The Copenhagen Hotels Hotel Bethel is a three-star establishment in a central location of Copenhagen, Denmark. The city center is just over a mile away while the Christianshavn Underground Station can be reached in a 10-minute walk. It is also near the Round Tower, Rosenborg Castle, and the David Collection. The hotel is air-conditioned and a quick five miles from the Copenhagen Airport. It features 30 well-appointed, non-smoking guestrooms.

Each guestroom at this hotel comes with a private bathroom boasting a shower and hairdryer. A flat-screen television and work desk are also included in the rooms. Complimentary high-speed wireless Internet access is provided along with a telephone, iron and ironing board, room toiletries, and soundproofing for peace and quiet. Breakfast is provided for guests along with coffee and tea in the lobby. There is also an on-site library for guests to use during their stay. Meeting rooms and computer rental services are also available.

This hotel is in a great location near the Royal Danish Theatre where events happen all year round. Guests can take in both modern and old architecture, tiny streets, a modern harbor, and beautiful canals. Attractions near the Hotel Bethel include the Standard Jazz Club, the Copenhagen Amber Museum, and J.E. Hartmann.

Plenty of restaurants and diners dot the area including La Sirene for Italian food, McJoy’s Choice for Danish cuisine, and Vaffelbageren for waffles with ice cream. Other places popular for meals include Selina Pizza, Nyhavns Hereford House, Brooklyn Bar Koebenhavn, and Heering Restaurant and Bistro.

FAQs when booking at Hotel Bethel

Where is Hotel Bethel located?

Hotel Bethel is located at Nyhavn 22 in City Center, 0.2 km from the center of Copenhagen. Amalienborg is the closest landmark to Hotel Bethel.

When is check-in time and check-out time at Hotel Bethel?

No, Hotel Bethel does not offer free parking.

No, Hotel Bethel does not offer free airport shuttle service.

How far is Hotel Bethel from the airport?

Can you bring pets to Hotel Bethel?

No, pets are not allowed at Hotel Bethel.

Does Hotel Bethel have a pool?

No, Hotel Bethel does not have a pool onsite.

“Great hotel. The room was just like the pictures. Comfy, quiet, clean and efficient. Beds were excellent. It is situated in the most beautiful area of the city and public transport is very close. Breakfast was adequate although it was the basic due to covid19 restrictions. The staff was very helpful and polite. Overall, a great hotel in the best part of Copenhagen.”
“Fabulous location and hotel is very good compared to others in Copenhagen.”
“The location is really perfect. In a walking distance from everything to see. Reception very helpful and supportive. I truly reccomend!”
“Perfect location, clean and comfortable, and great value for money.”
“The customer serves is extremely polite. I came to Copenhagen for work, as a classical musician and they provided me with a room to be able to practice, without extra charge.”