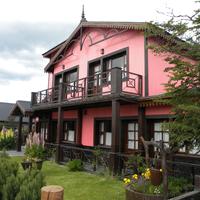 Excellent
based on 20 reviews
Compare vs. KAYAK |

With a stay at Campanilla in Ushuaia, you'll be near the airport, within a 10-minute drive of Ushuaia Port and Beagle Channel. Featured amenities include complimentary wired Internet access, complimentary newspapers in the lobby, and dry cleaning/laundry services. A roundtrip airport shuttle and a cruise ship terminal shuttle are provided for an additional charge.

FAQs when booking at Campanilla

Where is Campanilla located?

Campanilla is located at C/. Del Río, 825, 4.8 km from the center of Ushuaia. Laguna del Diablo is the closest landmark to Campanilla.

When is check-in time and check-out time at Campanilla?

No, Campanilla does not offer free airport shuttle service.

How far is Campanilla from the airport?

Can you bring pets to Campanilla?

No, pets are not allowed at Campanilla.

Does Campanilla have a pool?

No, Campanilla does not have a pool onsite.