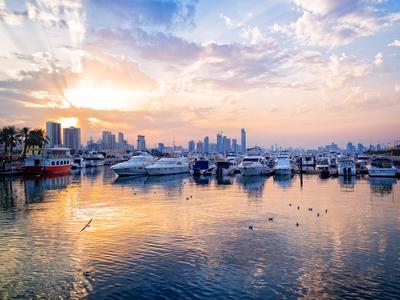 How long is the flight to Kuwait?

An average nonstop flight from Israel to Kuwait takes 9h 35m, covering a distance of 1289 km. The most popular route is Tel Aviv - Kuwait City with an average flight time of 9h 35m.

What is the cheapest flight to Kuwait?

What is the most popular destination in Kuwait?

Based on KAYAK flight searches, the most popular destination is Kuwait City (100% of total searches to Kuwait).

How does KAYAK’s flight Price Forecast tool help me choose the right time to buy?

KAYAK’s flight Price Forecast tool uses historical data to determine whether the price for a given destination and date is likely to change within 7 days, so travelers know whether to wait or book now.

Scores according to KAYAK customer reviews

Cons: "Airport team ask me to pay for 1kg and I have Already pay in Dubai as I was have 30 kg + 8 hand bag and 3 personal still she don’t like to talk and ask me to go and pay it’s will be my last fly with guys"

Cons: "Staff are not friendly, airplane was old and seats were very uncomfortable"

Pros: "Was the Crew very rude"

Pros: "The crew is good But the seats not comfortable .. it's like minibus .. no range of movement .."
Cons: "Toilet .. seats .. windows.. air conditioning must be stronger .."

Pros: "The flight was ok"
Cons: "My husband and son both ordered a wheel chair because I have rheumatoid arthritis and fibromyalgia and when I arrived in turkey they said there was no order for one. I walked through the airport at a snails PA e and since I arrived I have been very sick."

Pros: "Not much"
Cons: "Oh wow there’s a long list: -flight was late -no food or drinks were offered -seats were dirty -plane was dirty -staff spoke very limited English -every single food we ordered was “sold out” -credit. At cpayments we’re not accepted -toilets were not clean I could continue but the above suffices."

Cons: "Old plane, really crowded seats, the air crew doesn’t bother to clean the lavatories. Those who are working that is as the toilets up front were out of order..."

Cons: "My bag did not arrive"

Pros: "price good -- and it worth try again -- get more from this price"

Pros: "Not worse than any other low cost airline. Check-in went smooth, planes are new and cabin personal was friendly."
Cons: "Boarding was delayed due to late arrival"

Pros: "As noted above"
Cons: "Nothing really"

Pros: "Everything was on time, crew was nice, a lot of empty seats"
Cons: "Noisy children..."

Pros: "nothing."
Cons: "everything"

Pros: "The preorder food is good."
Cons: "The flight was delayed by 45 minutes."

Pros: "Fast boarding on time departure nice crew"
Cons: "really narrow seats no options to lower the back of the seat Water cost money no TV"

Pros: "The flight itself went smoothly"
Cons: "I expected to atleast get a glass of water"

Pros: "Desk personnel who checked us in spoke Not One Single Word to us in any language. We were kept standing in line to board even though the plane was late."
Cons: "The plane wasn't cleaned and empty bottle, used tissues and remainders of the meal served on previous flight were on our seats. People were not helped to stow carry ons and many should have been requested to check large carryon bags. They were out of beer even though beverages had just been loaded. Attendants could not clearly communicate the price of a beverage."

Pros: "The seats are comfortable and there was enough place in the overhead bins"
Cons: "The airport in Istanbul does not offer WiFi - which is unbelievable for 2017...."

Pros: "Connecting flight to Stockholm was cancelled. Had to fly to Copenhagen and perchuse another flight with SAS When complaining to their staff the answer I received was that no other airline would even give me an option to fly to Copenhagen (where I was not headed by the way) in short - paid another 300$, got to Stockholm 3 hours late and will never fly them againb"

Pros: "All was good but I thing thy need to give food with no pay 3.30 h fly thy need something free"

Cons: "My tent poles, which were attached to my bag were lost. I am hiking in Switzerland and have no tent now!!!"

Cons: "The way of talking to the passengers."

Cons: "The plane was stuck on the ground 1.5 hours approximatly in Istanbul, and nobody had told me why?!"

Pros: "Great team and great pilot everybody to the baggage people were excellent!"

Cons: "All they wanted was money. It was a scam. What is 8kg for a canyon? They would have charged me $75 for 5 kg! The only reason they didn't is because their system was down. They tried my credit cards and when that didn't work, they asked for cash. I never carry more than $5. There was no order in the airport and it was absolute mayhem. I went from line to line. I will never use this airline aha in! TWO hours to get my boarding pass? Anthony Gallo"

Cons: "the staff at the disk was so bad they charge me for extra weight more than what it should be they try to change the currency from turkish lira to euro then to my country currency just to collect more charge???. also when I paid by my visa card they didn't give me my recipt which mean they did something dicey."

Cons: "It took me two hours in line just to print my boarding pass even though I checked in online. Many of us thought we would miss the flight. Terrible customer service. I'm never flying with them again"

Cons: "Check in took 1.5h, that is why me and my wife werent seating next to each other, and also we almost missed our flight."

Cons: "Not even refreshments or a glass of water, almost all flights were delayed, no entertainment, lousy experience..."

Pros: "As long as I arrive safely, price is the most important thing about a flight..."

Pros: "The actual flight to Turkey was ok. nothing horrible happened."
Cons: "I came four hours before my flight, about 4 a.m.. two and a half was spent sending me back and forth because they couldn't agree on what was an appropriate price to charge me for extra baggage. The girl at the baggage counter called Pegasus and they told her the amount. When I got back to the baggage counter, the man there started checking my bags then the supervisor started yelling at me and him, because of a "miscommunication" between the other girl and Pegasus. I heard the other girl explain, and it was no communication. The supervisor as she called herself was extremely rude and short tempered with EVERYONE. Plus, they wanted to charge me 215 dollars for one extra bag. Really? I finally took a few things out and got away with under 90 dollars from the 20 dollars they were going to charge me before. I would have been happy to book with another airline that would have easily come under that price, and I barely got to my gate on time. I booked with Turkish air prior and it was 200 dollars round trip and I was very happy. My bags and food were free. When I got to Turkey to change flights, we had to get off the plane we were on and get on another, and my flight was over two hours delayed. We had to stay at the gate, and so I couldn't buy food at the airport. I would have gotten to Frankfurt at two so the small breakfast I had would have been ok, and now I had to buy food on the plane because I had planned also to meet a friend for dinner outside of Frankfurt before another flight (actually the entire reason I was flying with Pegasus in the first place) and now I wouldn't make it. Can you imagine spending all that money plus a hotel and the entire reason you went is just gone and you have to deal with all of this? So I go to buy food on the plane and I'm told my credit card doesn't work. The funny thing is, previously I checked my bags with the same credit card, and afterwards I rented a car and hotel with the same card. I knew my credit card worked. I made her try it again and nothing. So I just had to live on the small amount of yogurt I had had that morning. There was no apologies or anything for everything we went through except when my credit card wouldn't work the flight attendant gave me some coffee for free. I'm not a complainer and actually travel quite a bit (I've been traveling for 3.5 months straight all over europe and the middle east). This has been the only negative experience I've had. I truly believe that Pegasus does not care about keeping customers. I really feel like I've been treated like dirt, and that I was tricked into booking with them. I've always booked with Kayak and will continue to, but I would reconsider working with Pegasus if I were you. The other discounters like Ryanair are just fine. But this experience made me extremely angry and I will never book with Pegasus again."

Cons: "We arrived late and had to run over the airport to not missing our next flight. Arrived from Paris and had to take flight Istambul to Antalya."

Cons: "Flying from Zurich to Israel was able to board the plane with a carry on and a laptop back pack. On the flight from Israel to Zurich i was charged 130$ for extra weight having exactly the same things."

Pros: "The service of the team The guy ho check in ,i ask him for place infront of the plane and tell him that send e mail befor He give me first place for my parents becase its first time they fly"

Pros: "Cancelled my out bound flight from tel aviv with I notice. Can't contact them etc. horrible situation"
Cons: "Everything"

Masks required on board, masks provided on flights to Kuwait

Middle seats unavailable to book on flights to Kuwait

Testing for antibodies, testing for symptoms for flights to Kuwait