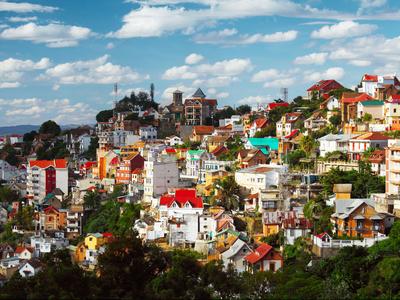 How long is the flight to Madagascar?

An average nonstop flight from Israel to Madagascar takes 32h 47m, covering a distance of 5522 km. The most popular route is Tel Aviv - Nosy Be with an average flight time of 39h 35m.

What is the cheapest flight to Madagascar?

What are the most popular destinations in Madagascar?

How does KAYAK’s flight Price Forecast tool help me choose the right time to buy?

KAYAK’s flight Price Forecast tool uses historical data to determine whether the price for a given destination and date is likely to change within 7 days, so travelers know whether to wait or book now.

Scores according to KAYAK customer reviews

Pros: "Crew was great but at the airport they had us weight our carry on and then made us check it for 90 euro."

Cons: "We didn’t travel to Detroit... we were re-routed 3 times and our luggage is lost, some really helpful ppl along the way (thankfully) and some really crummy ppl too... no in between... still not to our destination"

Pros: "The crew was amazing and extremely helpful!"
Cons: "The food could have been better"

Pros: "Good crew, as usual with Air France."
Cons: "Old plane with very lousy seats for a super expensive business class. Super slow check in and overall process till boarding because of lack of ground staff compared to passenger volumes"

Pros: "Crew was wonderful and welcoming!"

Pros: "Crew was awesome!!"
Cons: "I paid extra for the seat, but there was a metal box under the seat in front of me that curtailed my ability to stow my carry bag, and my leg room. I am very diappointed that I paid above the normal seat charge as if there was a premium to this seat, but in reality it was a sb par seat."

Pros: "The crew was friendly and always came around with water."
Cons: "The “vegetarian” option was tuna which isn’t vegetarian and there was no vegetarian snack. With the hundreds of dietary and religious food restrictions you would think having a vegetarian option would be much more attainable.. They also didn’t make an announcement about our flight being late."

Pros: "Crew and food were great."
Cons: "Old plane. Seats were super tiny and uncomfortable. Couldn’t sit in the same spot for longer than 15 min without getting sore."

Pros: "The crew was amazingly helpful. My son was having some anxiety and they went out their way to make him comfortable. They were the best!"

Pros: "Air France personnel is always really helpful"
Cons: "Food and comfort in short haul are not the best - but the flight is short..."

Pros: "Flight was delayed 4 hours with no explanation"
Cons: "Asked for wheel chair assistance and was not met in Paris. Had difficulty and barely made my flight. A gentleman who worked at airport assisted me"

Pros: "The crew was very accommodating. I couldn’t have ask for anything better...pass on my praise to the flight crew of 0083"
Cons: "Nothing"

Pros: "On time, staff was nice."
Cons: "Not many options and not even a glass of champagne. That’s a minimal requirement. No sparkling water. Just very limited"

Pros: "I was given a great seat and the food was OK- not the Air France food of 5 years ago but still good"
Cons: "I didn't really use the in flight entertainment - the usual movies, tv etc"

Pros: "Over all pretty good for price."

Cons: "I was treated like I am not supposed to ask for food and they had one choice of meal for me while they had 2 for the rest."

Pros: "Very quiet"
Cons: "We were in the last few rows on a turbulent route. The yaw damper constantly overcorrected, resulting in lots of side to side motion for the passengers"

Cons: "Told us to get in line for boarding and review our tickets and then made us stand there for 75 minutes before boarding."

Cons: "Crew not only lacked sensibility to understand the purpose of an emotional support dog but kept harassing me about the dog being tied to my seat. At some point a flight attendant even tried to touch my dog, invading my personal space. When the dog rightfully acted defensive trying to protect me, the crew member started threatening me that he would have the dog sent to cargo, the last thing a person with an emotional support pet wants to hear. Extreme lack of professionalism."

Pros: "Nithing"
Cons: "They were unfreindly and rude."

Cons: "The company simply lets passengers board a fulled booked flight with far too much luggage. Result, take off 20 minutes late because there was not enough room for luggage in the overhead compartments. I was flying with just a small backpack that went under the seat"

Pros: "Smoothness of flight and service"
Cons: "In a french airline, chinese-cuisine meal was more attractive than western. Unbelievable! Entertainment: films were either too old, or too uninteresting"

Pros: "It was Amazing staff helpfull and fresh.. love it"
Cons: "Flight of almost 3 hours was not entreteiment at all just magazines."

Pros: "Crew was welcoming"
Cons: "Space between the seats was too small."

Pros: "You can't go wrong with delta when it comes to customer satisfation. It's the primary reason I'm okay with paying extra money for delta flights"

Pros: "No delays, service with a smile"
Cons: "Nothing to report."

Pros: "Staff was responsive, effective and pleasant; Nice selection of digestifs too. Food was decent and, in airline level, even good."
Cons: "The audio system is outdated with unreliable touch-screen that makes it frustrating to navigate."

Pros: "Cheap aircraft, not even headsets"
Cons: "Dirty aircraft, I expect more when I pay a lot"

Pros: "Food, drinks, and general service on board were all very nice"
Cons: "Airport experience at cdg was atrocious. Took more than an hour to check in and it was a complete zoo."

Pros: "You get everything you would expect in this kind of flight in term of meals, comfort and entertainment."
Cons: "The flight left half an hour late because of weather conditions. But it is more an airport issue rather than an airline one."

Masks required on board, masks provided on flights to Madagascar

Middle seats unavailable to book on flights to Madagascar

Testing for antibodies, testing for symptoms for flights to Madagascar